Strangefish began in 1989 in a suburb west of Manchester, England. We started as most bands do, with some like-minded people getting together to play cover versions and have a go at writing songs. Various musicians came and went until we settled on the line-up that ended this period. Only Steve and Paul remain from the original band.

Gigs were mainly in pubs and clubs with the odd trip to Manchester venues to see if we could make an impact. Often the crowd would not be expecting a band to be playing so Steve in particular would have to work hard to get the material across and keep people’s attention. The music written at this time was based around basic rock ideas with a hint of prog. Songs that have stood the test of time from this period are ‘Wallflower,’ ‘The Lighthouse Jig’ and ‘Ladders.’

The main emphasis in the band was one of a bunch of guys having fun and having a go at writing. We were all influenced by bands like It Bites, Rush, Led Zep, Marillion, Zappa, Gillan, Wishbone Ash, Yes, Genesis etc., but as well as this the new people coming and going always brought in something fresh such as classical, jazz-funk and pop ideas.

Around 1995/6 the band activity had virtually stopped as we were busy starting families but the various members kept in touch and would still meet up socially on a regular basis. 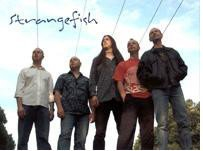 In 1999, the opportunity of some local gigs arose. To do this we needed a bass player so having previously invited Julian Gregory to do his Nigel Kennedy routine with us we asked if he would like to take up the bass role too. Julian (still) plays Violin with the BBC Philharmonic and was able to get us to do a recording in November 2000. This formed the basis for our first EP, ‘Reeled In,’ and it was this demo that landed us with our first gig at the Classic Rock Society in 2001. 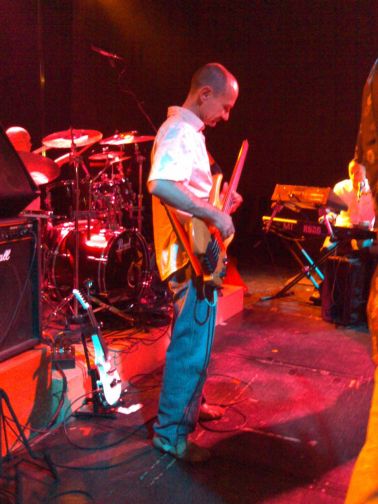 The debut concert was a fantastic success and a lasting friendship with the CRS was formed with the band collecting multiple awards over the next few years. English progressive rock music has a long tradition of having its tongue firmly planted in its cheek and we were pleased to continue with this in our approach to our live performances. Consequently some venues and critics found themselves bemused that 5 guys could get up on a stage, tell jokes, hurl numerous inflatable objects out into the audience and then go on to play ‘involved’ and ‘serious’ music.

Strangefish played multiple concerts at the CRS, London Astoria and various other venues around the UK. Buoyed up by the support received we recorded and released our debut album in 2003. Continuing with the aquatic theme of the content and our name we called it ‘Full Scale.’ The album represented the realisation of our new confidence in writing and performing progressive rock music. The content of the album was a collection of older songs and new material, in particular ‘Shifting Sands and Turning Tides’ – our own take on the events of 9/11.

Another new song, ‘At First Sight’ helped to point the way towards the next album and the opportunity to tell an extended story with music and lyrics. ‘Fortune Telling,’ Strangefish’s second full album was released in Feb 2006. The album was critically acclaimed around the world and won Best Album Award at the Classic Rock Society. This was a chance for us to get across some of our thoughts on materialism, marketing, greed, trust and the search for what is important in life. We created an ‘everyman’ story of someone who believes he has won a vast amount of money only to be happy to accept that wellbeing matters far more.

By 2007/8 the latest incarnation of Strangefish was showing signs of having turned full circle and the collective view was one of “let’s take a break.” The decision was made to shut things down until such time as the enthusiasm and energy necessary to do this thing called Strangefish had returned. At this time we received the sad news that Rob Leighton from Radio Caroline had died so the 2008 charity concert in his memory at the CRS was the last performance and a fitting conclusion to that period of Strangefish activity.

In the autumn of 2012, after another Strangefish fallow period, the band reconvened for what was expected to be a one-off performance for a local fund raising event. On this occasion, we rehearsed as a 6 piece band, inviting Jo Whittaker (Dave’s wife) to sing backing and lead vocals, and Carl Howard, an old friend and previous musical associate, to help out on bass. Way back in the mists of time, Dave, Jo and Carl had all played in a band called Matrix and had enjoyed some success. Rehearsing and playing again revived our enthusiasm for all things Fishy so we carried on working and writing until we felt ready to resurface in early 2014, with an announcement that we were to play again at the CRS May 10th.

The addition of Carl has resulted in a stronger interaction between bass and guitar with a more direct, heavier sound. He is also a welcome contributor to the writing of new songs. Having Jo on board means greater vocal richness with Steve and they are working on developing vocal harmonies for new and old material.

For the new shows we intend to air some new material, whilst some previously unplayed songs are being given a fresh look to see if they integrate into the set. One thing that remains completely unchanged is our attitude towards the music and live performance. So here we go, it will be interesting to see where this leads.

Most of 2018 was taken up with producing and launching our 3rd album The Spotlight Effect. We were all proud of the results however the effort involved took its toll. Following the launch gig in Manchester, Carl felt unable to continue with the band. Carls input to the album and band’s organisation was very large and we were all unsure what to do next or if Strangefish was to continue.

Dave Kennedy, a long standing supporter of the band had arranged a gig for May 2019. The band were keen to honour the booking so we asked an old friend and associate Kris Hudson-Lee if he could help. Kris immediately accepted and took on the huge task of learning the bass parts. After a few rehearsals it was clear to us all that this was going to work. Kris’s style is very much a blend of Julian and Carl’s so he is a very welcome addition to the fish pond. 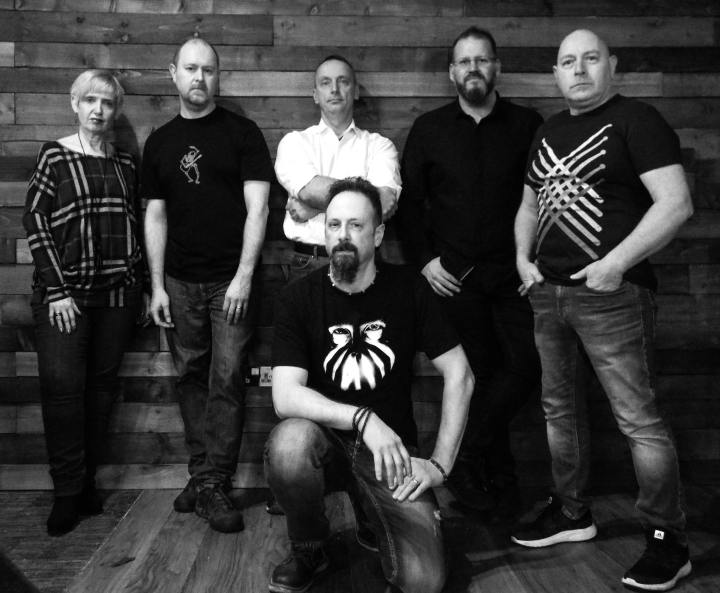